Glory for Ballyvary and Newport 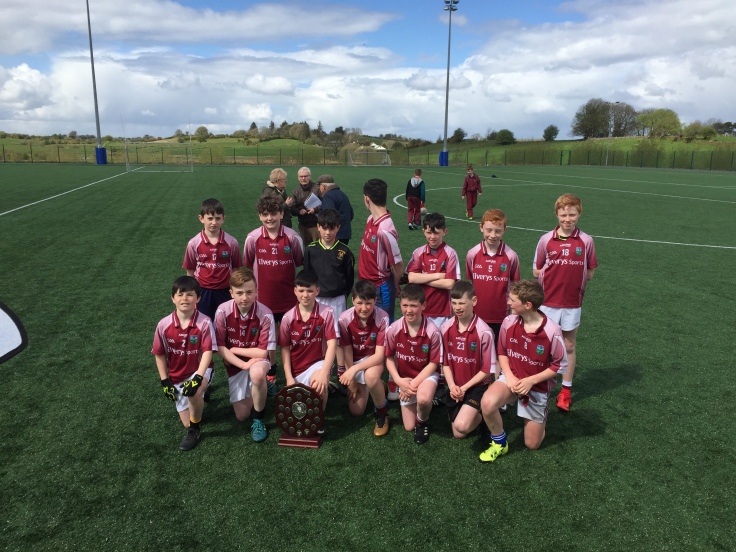 There was success for Ballyvary National School for the first time ever in the Boys final and for Newport NS in the girls decider when the Cumann na mBunscol finals were decided at the Connacht GAA Centre on Friday last.

As usual both finals produced some thrilling fare, with the boy’s decider in particular serving up arguably one of the best games in the competition for many a long day.

This was a game for the ages! What a privilege to be in attendance at what must rate as one of the best finals to grace this competition.

The standard of play was such that one wanted it to go on indefinitely.

From start to finish the pace was unrelenting with both sides’ producing some magnificent football. It was so good that one seasoned spectator on arriving late enquired if the teams were post-primary school students, rather than national school pupils.

Both sides must be complimented for their command of the latent skills of the game; certainly on the basis of what unfolded here the future of the game is secure in the county well into the future.

Competition specialists the Quay started with all guns blazing and looked as if they were going to win pulling up.

Goals from Paraic Gavin, Mikey Cadden and Peter Barrett gave them a great start. A point from Colm Lynch was Ballyvary’s sole reply.

As the game evolved, Ballyvary found a way to prevent the dangerous Ballina forwards from penetrating their close-knit defence.

During the ensuing play, the winners’ played some thrilling football culminating in them scoring 3-4 to a single point.

Livewire Tiernan Tighe raised a white flag for the losing side just before the break.

The pace never flagged in the second period, with both defences giving an exhibition of defending at its best. This was the main reason the scores dried up to a large extent, rather than any falling off in the standard of forward play.

The likes of Jack Morley (son of Mayo u-17 manager Tomás) and Rory- Lowe Walsh were terrific in deploying last-ditch blocks to deny a dangerous Ballina side scores.

Considering the quality of the forward talent on view, the teams could only muster three points between them during the half.

Colm Keaveney kicked one for the winners’, with Jack Morley supplying the other.

Despite an almighty effort from a talented Ballina side, Ballyvary held on for their first ever title at this level.

In keeping with the sporting nature of the game, the Ballina mentors were the first to congratulate them.

Speaking to the Mayo News afterwards, Ballyvary joint-manager John Cloherty felt that overall balance was the determining factor in deciding the destination of the title.

From a very early stage of this final it became obvious that Newport carried too much firepower for a gallant Gaelscoil Uileog de Búrca side.

They were better-balanced and scored goals at vital stages of a decider that produced some fine football.

The losing side are very young, with many of them eligible for the competition next season, and for that reason they shouldn’t be disappointed to lose out to an above average Newport side.

Newport was very well-schooled and had no apparent weaknesses. Collectively and individually, they possessed a thorough knowledge of the fundamentals of the game. Their ability to eke out scores quite easily marked them out as worthy-winners of the coveted title.

They started impressively, with one of their outstanding performers Aba Palasz hitting the net in the opening minutes.

Ellie Nic Uidhir replied with two minors for the Claremorris School. For a while it looked as if the vanquished side would offer stiff resistance. However, as the play progressed, the class of the winners’ surfaced.

Hannah Sheehy notched another goal after Aba Palasz delivered a lovely pass to her.

It could have been more but for the excellence of the Gael Scoil goalkeeper Naoise Ní Ifearnáin.

The game practically ended as a contest in the opening minutes of the new half when Aoibhean Chambers and Hannah Sheehy raised green flags for a Newport team that showcased their vast repertoire of skills.

The losing side remained competitive with Ashling Ní Choimín drawing a great save from Elana Chambers in the Newport goal.

Aba Palasz scored two further goals for the rampant winners together with two minors. Team captain Aba Kelly also pointed a free to leave them out of reach.

Just before the end, Ashling Ní Choimín and Sienna Ní Cheallaigh scored goals for the losing side to put a more respectable look on the scoreboard.

We would like to extend our thanks to our referees Peter and John and Connacht GAA for the use of their wonderful facilities. Special thanks to Mayo GAA Games Manager, Billy McNicholas, for running events on the day.